A criss-cross copse, paths meeting at some clearing in the trees, is clear as day from seat 18A. Down there the wood is a maze, a mysterious place where unseen arrows may fly, or a deer appear, hoof raised as it scents the air. 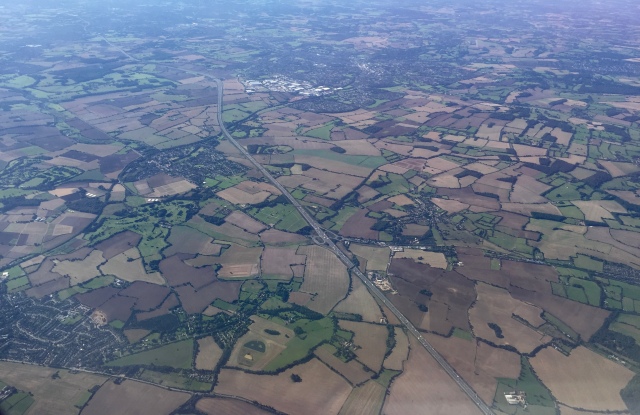 The Home Counties of England sprawl in fields of autumn gold and chestnut, some dark-brown turned-earth and patches of pale-washed grazing green or the seedling flush of winter crops. Their curving, erratic boundaries were laid down by centuries of strip-farming, irrigation or plague, Enclosure and the machine-demands of agri-business. The hedgerow-decimation has not made them tidily square, though right-angles at the edges of woods, ruler roads and arrow-straight railways, shout out beneath the shifting cloud shadows.

Hamlets cluster on the flatlands, placed at seeming random; the niceties of fordable streams, convenient look-outs or other magnets for settlement invisible from the air. Village positions are hallowed by time, proud of their Domesday legacy, jealous of Tudor mansions, reliving the tides of civil war or Napoleonic defense. Iron Age forts, meanwhile, are shrouded in long grass on forgotten tumuli. Sacred wells are mere springs beneath a boggy corner. History acknowledges the Romans, remembers the Saxons and got going with the Normans. Conquest; assimilation and now urgent defense against imaginary enemies trump realities of escapees from  contemporary invasions.

The Dartford Crossing is a toy with spikes as a container ship inches up-river, the water muddy and opaque. Tilbury is left behind as our wings tilt again, turning back towards the reaching roads and crescents, passing the armadillo hats of the Thames Barrier. The dense City reaches up at our undercarriage while docks and roads alike glitter in September sun. Churches sit in their green graveyards and trees flourish in municipal heartlands and wealthy enclaves. Our shadow crosses the roof of Excel before we swoop, low and loud, over Galleon’s Reach.

We have arrived in that fifth country of the Union. London.

I'm a writer, a sailor and a strategic adviser to public organisations. Visit my websites to find out more.
View all posts by Sarah Tanburn →
This entry was posted in Places and people and tagged Cardiff, flight, London, UK. Bookmark the permalink.